“We are never more fully alive, more completely ourselves, or more deeply engrossed in anything then we are when we are at play.” – Charles Schaefer

Cyclists fly by, tourists stroll, joggers cruise the path, rollerbladers whiz by and all Seawall outdoor enthusiasts  look out into the bay and marina...it's easy to see why the Seawall is Stanley Park's and Vancouver's most famous feature!

It's origin is an impressive 8.8 kilometre (5.5 mile) paved route that loops around the park and, along with adjoining seaside pathways, connects the park to Downtown Vancouver and skirts its entire inner waterfront.

Created in 1917 with the goal of staving off erosion, the Seawall took 60 years to complete.  Today, it is the parks most popular walking, jogging, biking and rollerblading path, and because of its relatively flat terrain, it's a wonderful route for all ages and abilities.

The iconic and picturesque seawall has now expanded beyond the parks boundaries and encompasses 22km (14 miles) which lines Vancouver's Waterfront extending from Coal Harbour all the way to Kitsilano Beach. Whether you wish to walk, cycle, jog, rollerblade, stroll or take the Aquabus across it is the most popular recreational spot in the city.

The Seawall is divided into two clearly marked sections-one for cyclists and inline skaters (inside path) and the other for walkers and joggers (closest to the water).

You may enter the Seawall from various points in Yaletown and head to English Bay or Coal Harbour or in the other direction to Science World and Olympic Village.

You can also drive through the entire park and stop to enjoy some of the breathtaking views along the way.

It really doesn't get much better than this. 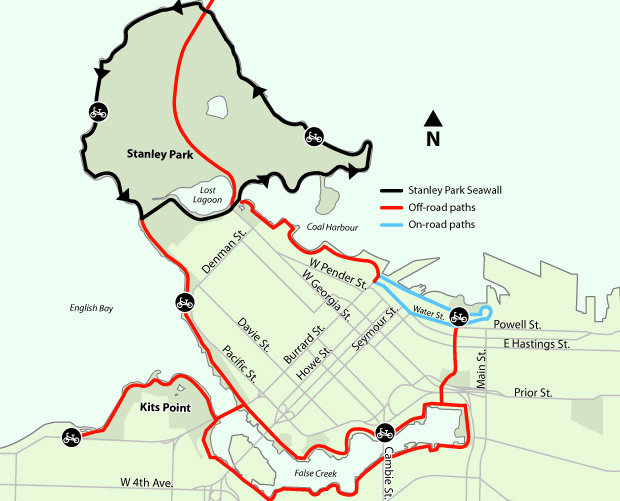 This communication is not intended to cause or induce a breach of any existing agency relationship.

Site Design is a copyright myRealPage.com Inc. All rights reserved.

The data relating to real estate on this website comes in part from the MLS® Reciprocity program of either the Real Estate Board of Greater Vancouver (REBGV), the Fraser Valley Real Estate Board (FVREB) or the Chilliwack and District Real Estate Board (CADREB). Real estate listings held by participating real estate firms are marked with the MLS® logo and detailed information about the listing includes the name of the listing agent. This representation is based in whole or part on data generated by either the REBGV, the FVREB or the CADREB which assumes no responsibility for its accuracy. The materials contained on this page may not be reproduced without the express written consent of either the REBGV, the FVREB or the CADREB.